Home
Best of Rifle Scope
Why Is Night Vision Green?

WHY IS NIGHT VISION GREEN? 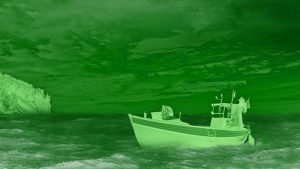 WHAT IS NIGHT VISION?

If you ever watched movies Snowpiercer, The Silence of the Lambs, Jurassic Park, Bad Boys, 12 Strong, World War Z, or G.I. Joe Retaliation, you must have noticed how the characters perform in the darkness by wearing green night vision devices. They see everything in green tint in low light environment. The reason for this is, Human beings visibility capability do not work like animals. They cannot see clearly in the night without light and the vision is unclear and blur. Night Vision is for human beings to see things in low-light conditions. This vision is made by combining two different approaches i.e. sufficient intensity and sufficient spectral range. The most important benefit of night vision is it gives the ability to see what actually cannot be seen. It has great uses not only in military operations but also in the civilian sector. It is used to ensure security, for surveillance and different outdoor activities.

The human body is designed to work in the day and sleep at night. One cannot see in the night without light. Unlike human beings, most nocturnal animals and birds do have clear and fast visibility and can view things in low light conditions. Cat which is famous to stay outside and hunt in the night have tapetum in their eyes which helps them to see things. Tapetum is the natural mirror which reflects the eyes. The work of tapetum is to throw out the incoming light through the retina twice so that cats have double chance to see the thing if they miss.

On the other side, popular nocturnal bird, Owls, sleep in the day and are active at night have binocular vision. Binocular vision helps the owls to see the three-dimensional image so that they can spot movement on the ground from the tree branch. Human eyes do not have rods or tapetum to view things clearly at night. So what should we do to see the light in low light conditions? The answer is, we can reach for night vision technology. 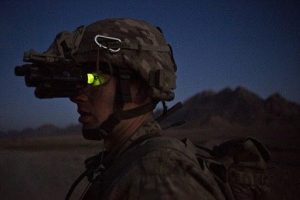 It is right that night vision cameras and optics have changed the game of warfare and law of enforcement upside down. But the question is when did this fundamental concept rise? And how did it turn the nature of warfare? You might be amazed to know this technology has been in the world for a while and it was being used extensively in World War II. After the invention of Zeppelins, the air crafts used in World War I, Germany in the mid of 1930s developed this tremendous invention to see what cannot be seen in the dark. German tanks and infantry used them practically during World War II and created devastation in the lands. Simultaneously, the military of the United States of America developed their night vision which they used not only in World War II but also in the Korean War. These night vision devices required huge power-supply carried by soldiers during the wars which needed good amount training and practice to use them efficiently.

With the advancement in military technology, the night vision optics and rifles became more sophisticated and easy to use. It switched to the technology of image intensification and offers small enough to be worn easily on the head. This idea of “portable” night vision on a practical level did not come true until the Vietnam War when US army soldiers began to wear them on their heads. Today the second generation night vision devices are widely used for civilian use, military night vision devices have been upgraded for the night operations. However, despite all advancements the image intensification work on the same principles used in World War II. 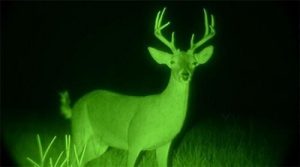 HOW DOES THE DEVICE CREATE GREEN NIGHT VISION?

Image intensification element is made of phosphorus and this is used due to its luminance effect. We are well aware that phosphorus is green in colour. When it is struck by the electron which does not have any colour so it glows bright green in the darkness. Therefore, its luminous capability to catch the light from the surrounding area is green that is why night vision devices have the green vision. When the electron passes through the microchannel plate: a disc which has millions of microchannels. The burst of these microchannels increase the motion of electrons quickly and form dense clouds that intensify the original picture. The same electrons strike with phosphorus, and the energy from these electrons build the green image in the device appear on the screen. The green phosphorus is used in the night vision devices because the human eyeball is more sensitive to green tint and able to differentiate more shades of green than any other colour.

There are a few reasons that the night vision tint is “Green”.

KINDS OF RANGES IN NIGHT VISION

There are two ranges widely used for night vision devices.

Sufficient intensity range is the ability to view a small amount of light. The reason behind animal night vision is the size of an eyeball. The most animals have larger eyeball, larger lens, more rods in the retina and a tapetum. This is why animals can have a larger vision than human eyes. So for the human being enhanced intensity range is achieved with the help of image intensifier.

Sufficient spectral range is the capability to see the light which is invisible to the human eye. The human eye is confined to the electromagnetic spectrum also known as visible light. This range allows the person to take advantage of invisible sources of ultraviolet radiation and near-infrared. Trout and mantis shrimp can use much infrared to view things than human beings.

The night vision device is also known as a night optical device. It produces the level of images in total darkness. The Images is usually monochrome i.e. in green tint. Night vision devices were being used in World War II for the first time and have been widely used by the U.S. military during the Vietnam War. Since then, the technology has evolved and progressed greatly and extensively leading to several generations and now they are available for a wide range of applications like gunners, drivers and aviators. The evolution in night vision devices is discussed below.

The generation zero devices were generated in World War II to brighten up the scene. However, it was quite cumbersome to take along the device as the device was quite heavy and big. Generation Zero used by Germany called “Night Hunter” which was as large as the size of plate moreover required a lot of power supply carried on warrior’s back.

THE GENERATION ONE (GEN I)

The generation one device has been used in the Vietnam War in 1960 by U.S military. The GEN I depended on ambient light instead of the infrared light source. The few examples are AN/PVS-2 Starlight scope, PNV-57E tanker goggles etc.

GEN II devices have improved intensifier tube developed in the 1970s. This brought a brighter image especially around the lenses and amplified the vision in the low light environment. The light amplification was 20,000. The few examples of this generation are PNV-10T and AN/PVS-3 Miniaturized.

Generation three was developed in the 1990s with further improvements in image resolution. The power consumption was higher than GEN II. The light expansion was also improved in this generation i.e. 30000 – 50000. The examples of GEN III night vision are AN/PSQ-20 and AN/PVS-7.

Generation 3+ was introduced in 2000 by the US Army research lab. It was quite different from generation three in several aspects. This generation has an automatic gated power supply which adapts to see the clear light in different light condition. Another difference is the removal of thinned ion barrier which results in less image noise. The example of generation 3+ is AN/PVS-22.

The night vision technology has made huge advancement over time and created higher fidelity light. You can notice that zero generation turned into starlight-scopes which used the image intensifying tube to enhance ambient light and produce an electronic picture of a dark area. This increases the amount of light received from the natural light like starlight or moonlight and expands it in night vision devices to view the scene.

DO THE NIGHT VISION DEVICES WORK IN COMPLETE DARKNESS?

Night vision goggles are also called image intensifier as it takes the tiny amount of light and boosts it enough for the eyes to see it.it is simply amplifying so the user can see even when its pitch black, However, what if someone trapped in smoked filled building how would he see then? The idea of image intensifier would be so little inconvenient at that moment. The good replacement of image intensifier is thermal imagining. Rather than looking for the light reflected from the object, it looks for heat. It is evident that in complete darkness, living things moving around are hotter than the surroundings, this is also for the machines and vehicles. Hot objects in darkness emit infrared radiation. So the cameras which pick up infrared radiation can convert into visible light and produce the visible image. In the end, the answer is both image intensifier and thermal imagining devices work well in complete darkness with a slight little difference.

USES OF NIGHT VISION OTHER THAN MILITARY SECTOR

Even if you are not a soldier or belong to an army still you can use the night vision in your certain outdoor activities. If you are an animal freak and like to see them at night. You can use night vision device for wildlife observation or the night hunting, fishing or boating. You can also detect the hidden object in your house like mobile, key or wallet if there is no electricity. You can use them in your adventure like camping, boating and exploring caves. If you are in the repair company/shop you can use it to repair your things in a better way.

Green night vision is a game-changing revolution. In this article, we have discussed the certain reasons why night vision is green. We tried to provide you detail insight into why do night vision have a green tint? We have also come to know that Night vision has made tremendous advancements in terms of its size, clarity, and visibility since World War II. With continual progress in this technology, there were few breakouts which have been amended and few are still in progress. It will be thrilling to see what new advancement would be introduced as the night vision industry grows and how it would make it high fidelity, more practical, compact and operational even in extremely low light conditions. 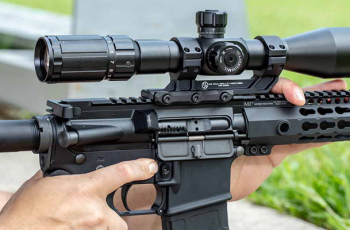 Our website is made possible by displaying online advertisements to our visitors. Please consider supporting us by disabling your ad blocker.

Any cookies that may not be particularly necessary for the website to function and is used specifically to collect user personal data via analytics, ads, other embedded contents are termed as non-necessary cookies. It is mandatory to procure user consent prior to running these cookies on your website.